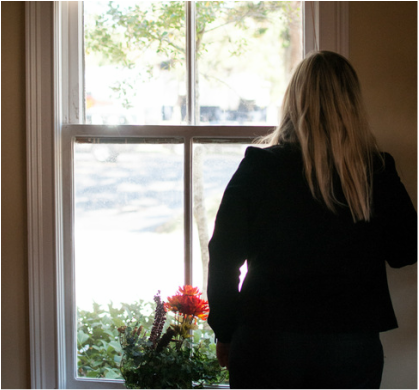 No one ever goes into a marriage or parenthood with the expectation that they will one day need the services of Kids Bridge – no one. Thank goodness they were there for me and my children though when life handed us the unexpected.

My story is like so many others out there. I had been married for more than a decade when it happened. My kids were little. The stresses of two working parents and two young kids proved to be more than my then husband could handle. He had been a hard worker for years with a steady job and a steady income but something happened that year that made him transform into someone who simply couldn’t handle all the demands of life any more. I noticed first with the prescription medication that he was taking. Then came the drinking after work and on weekends. Then it spiraled out of control from there.

After several threats and a few violent outbursts, I felt I had no alternative but to seek a restraining order. I didn’t want him to get in trouble but I felt as though he was a ticking time bomb and the kids and I needed to be safe. He needed help. I could barely fill out the forms I was crying so hard. I was so scared, I didn’t know what else to do. When we went to court, the judge informed us about Kid’s Bridge and ordered that my children go there for supervised visitation with their father. I had no idea what he was talking about – what’s Kid’s Bridge, I thought. I had driven past that cute little house on San Marco lots of times, but I never knew what it was or what purpose it served. I soon found out how much of an important role that building and those people were going to play during one of  the most difficult periods in my life.

On our initial visit,  I was instructed to arrive a few minutes beforehand with the kids and get them acquainted with the Kid’s Bridge staff. Immediately, they loved her and were fascinated with the playground and all the toys in the rooms upstairs. I was relieved that they felt so comfortable there and it made it so much easier for me to drive away, knowing that they were in good hands and were happy. I’ll admit, it wasn’t easy though.  A short time later, their father arrived and he brought them food and he played with them for an hour or two. They enjoyed seeing him, and I knew they were safe there with him. Later on, I went back to pick them up and take them home.

Ultimately, we wound up using the KB services for many months. The kids did the supervised visits both mid-week and every other weekend. Throughout the many months until our divorce was final, the dynamic of our husband/wife relationship was so awkward and uncomfortable, without access to the services of Kid’s Bridge, I’m not sure what we would have done. It could have been detrimental to the children to have seen us interacting with such distaste for one another while we were dividing our property and literally fighting over everything. Luckily, we were able to continue to utilize Kid’s Bridge as a drop off point for exchanging the children. I could drop them off there, they would play for a little while, then he would pick them up there, go have his visitation time with them unsupervised and then bring them back to Kid’s Bridge where I would later go back and pick them up. Using Kid’s Bridge for an exchange venue eliminated the need for he and I to interact face-to-face whatsoever.  That was ultimately the best possible scenario for us all.

During that time, I remember the shame and uncertainty that I felt. My marriage had failed and my kids were going to have to deal with reality of being part of a “broken” home and being jockeyed back and forth between us. I hated the idea of what that meant for them. It was a horrible season in my life, full of unknowns and fear. The staff at Kid’s Bridge were always so encouraging and uplifting. They shared resources and information that proved to be very helpful. They offered classes for me and the kids to help to understand the emotions that we were all dealing with.

It’s been many years now since we used their services. My kids are grown and gone but I will never forget how vitally important Kid’s Bridge was to us all. They provided a safe haven for me so I did not have to have direct contact with the person I was so afraid of. They were a fun and playful place for my kids to go where they got to “see daddy” and just be kids. In fact, it was there that I believe my kids shared some of their fondest childhood memories with their father as he did puzzles and colored with them. That sort of interaction rarely occurred at home, but it was a regular occurrence during their time with him at Kid’s Bridge. KB also provided their father with a place that he could go and see his kids and have that quality time with them. Our whole family benefited from the Kids Bridge experience. I’m certain other families have/will too…